The First Cost of Freedom is Supporting Our Veterans!

Abstract  Because hyperbaric oxygen treatment mobilizes bone marrow derived-stem/progenitor cells by a free radical mediated mechanism, we hypothesized that there may be differences in mobilization efficiency based on exposure to different oxygen partial pressures. Blood from twenty consecutive patients was obtained before and after the 1st, 10th and 20th treatment at two clinical centers using protocols involving exposures to oxygen at either 2.0 or 2.5 atmospheres absolute (ATA). Post-treatment values of CD34+, CD45-dim leukocytes were always 2-fold greater than the pre-treatment values for both protocols. Values for those treated at 2.5 ATA were significantly greater than those treated at 2.0 ATA by factors of 1.9 to 3-fold after the 10th and before and after the 20th treatments. Intracellular content of hypoxia inducible factors −1, −2, and −3, thioredoxin-1 and poly-ADP-ribose polymerase assessed in permeabilized CD34+ cells with fluorophore-conjugated antibodies were twice as high in all post- versus pre-treatment samples with no significant differences between 2.0 and 2.5 ATA protocols. We conclude that putative progenitor cell mobilization is higher with 2.5 versus 2.0 ATA treatments, and all newly mobilized cells exhibit higher concentrations of an array of regulatory proteins. 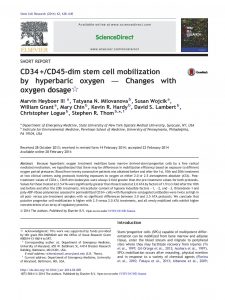 Please help us help our Veterans