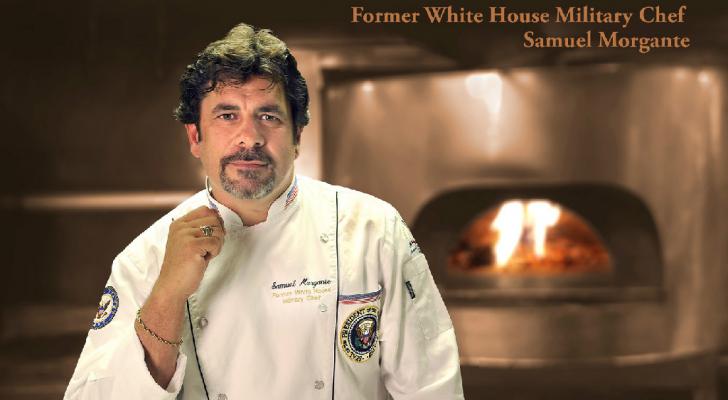 Chef Sam Morgante is a native of Danville, Pennsylvania and a graduate of The First Coast Institute of Culinary Arts. He retired from the Navy as a Chief Petty Officer in 2005 after serving as a White House Chef under former President George W. Bush.

Chef Sam has associated himself with the International Food Service Executive Association (IFSEA), Johnson and Wales, The Culinary Institute of America and The Pennsylvania College of Technology. He has completed advance culinary training in St. Augustine, Florida with The First Coast Institute of Culinary Arts. During Chef Morgante’s assignment with Presidential Food Service, he was awarded the Five Star Diamond Award from the International Food Service Organization for 2003, 2004 and 2005. His personnel decorations include the Navy/Marine Corps Commendation Medal, Navy/Marine Corps Achievement Medal (7 awards), the Navy Good Conduct Medal (5 awards) and various service and campaign awards.

As a culinary specialist in the Navy, Chef Sam was assigned to numerous ships and submarines, some of which include: Trident Class, Ballistic Missile Submarines, Fast Attack Submarines and The Kennedy Battle Group. Chef Sam was actually hand selected from the Kennedy Battle Group by the Admiral due to the fact he was the only Navy vessel that had real “Turkeys” to serve to his crew for Thanksgiving. While on assignment, Chef Sam has personally served the King and Prince of Jordan, and their entourage.

Retiring from the Navy in 2005, Chef Morgante began his civilian career at the Nittany Lion Inn at the prestigious Penn State University. In the past 8 years Chef Morgante has paired himself with companies such as ARAMARK, Village at Penn State, Pennsylvania College of Technology, and The Families United Network. He is currently touring with Presidential Chef Productions and highly supports Team Veteran Foundation, NAVOBA and local Veteran Organizations.