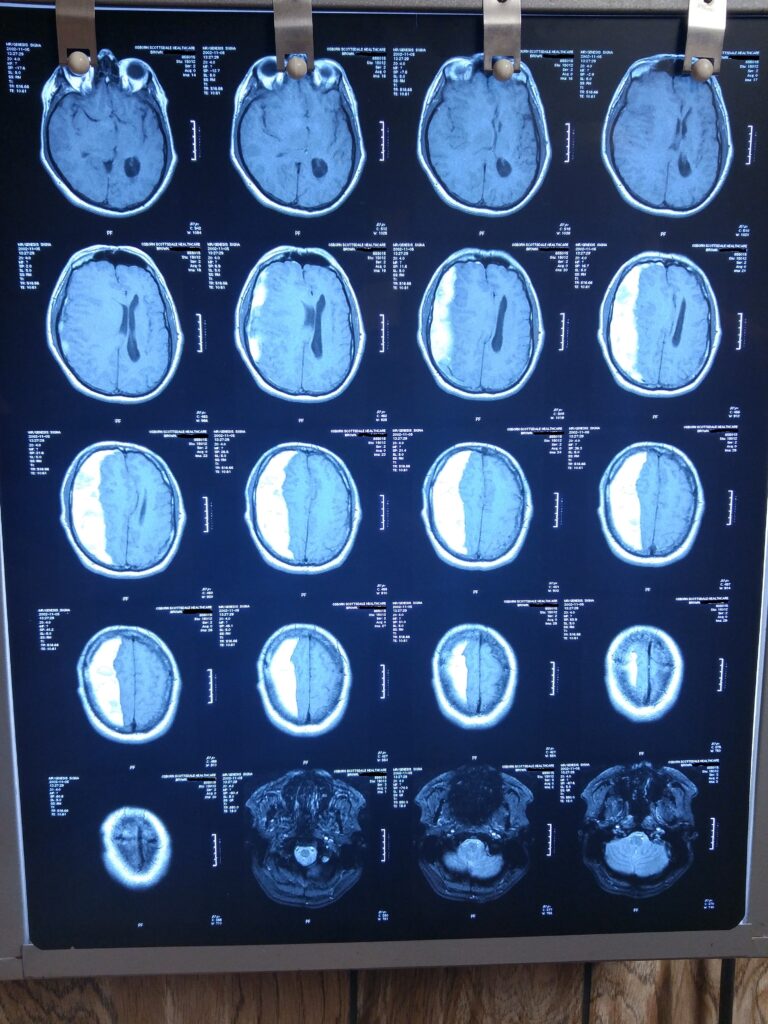 The founder of Team Veteran Foundation, Gordon Brown, is a survivor of a near fatal Traumatic Brain Injury (TBI) and underwent emergency brain surgery 11/5/2002. “After a severe blow to the right side of my head I began bleeding on the brain. The bleeding continued for almost two months. I had a venous subdural hematoma and the MRI taken on 11/5/2002 indicated the upper right quadrant of the MRI was predominantly white, an indication the area was filling with blood from the damaged vein.”

“Post-Op I suffered two grand mal seizures, flat-lined twice and had a near death experience (NDE). I was placed on a daily dosage of 650mg of Dilantin and 750mg of Depakote supposedly to prevent future seizures. For three and half years I was on those drugs and had suicide ideation almost daily. After fighting the drug induced suicidal thoughts and a very serious suicide attempt incident I demanded to be taken off the Dilantin/Depakote cocktail. I was seconds away from being a statistic and being 1 of the 22-30 Veterans that die by suicide daily. I found out later that there was no reason to be on these drugs, because the seizures were caused by the brain surgery.

“Living with the aftermath of a Traumatic Brain Injury (TBI) was a very frustrating and confusing process. I had trouble with speech, reading, long and short term memory, word searches, balance, sleep, and anger just to name a few. Associating with people I didn’t know was extremely difficult, and that started a journey to find something to help with a more deliberate recovery.

“I researched many different possible therapies and used cognitive rehabilitation therapy to help in relearning to read. I found that when I read, my eyes would stop tracking after about two sentences and I had 0% comprehension. I used audio books and the same version of the written book to force my eyes to track, two months later I was reading again.”

“My search took me down many paths eventually leading me to a therapy called Hyperbaric Oxygen Therapy or HBOT. I became almost obsessed with learning all I could about HBOT and the potential to treat my physical brain injury. I started sponsoring my Brother and Sister Veterans to receive hyperbaric oxygen therapy (HBOT) that also had suffered a TBI. I was very excited about one day, myself, completing the 40 1hr “dives” recommended HBOT protocol for a TBI. A “dive” is what a HBOT treatment is called because the chambers are used to treat SCUBA divers that are suffering from decompression sickness (DCS) also known as the “Bends”.”

“I was contacted by someone in the HBOT field who told me they had heard about what I was doing and offered to sponsor my 40 “dives”. On 09/21/2015 I started the recommended 40 1-hour “dives” in a multiplace Hyperbaric Oxygen Therapy chamber and finished the 40th dive on 11/13/2015. The TBI had negatively impacted my cognition and the HBOT dives returned my cognition to normal or better. “The incredibly positive changes I witnessed during my dives is the drive to create Team Veteran Foundation Wellness Clinics. These clinics will help bring a permanent end to the 22-30 daily Veteran suicide epidemic. A suicide is like no other death for the family as the wounds never heal. One of the cornerstone treatments of the Team Veteran Foundation Wellness Clinics will be the Hyperbaric Oxygen Therapy (HBOT) chambers for the treatment of the physical brain injuries suffered during a Traumatic Brain Injury (TBI). I also discovered HBOT is very successful in detoxing the body from chemical exposures like those attributed to the open-air Burn Pits used in Iraq and Afghanistan. As a Blue Water Navy Vietnam Veteran, I was exposed to Agent Orange during my time in the Gulf of Tonkin on aircraft carriers, during my “dives” I discovered HBOT aids in detoxing those chemicals.”

Do you believe that Veterans deserve a non-drug alternative therapy to treat their physical brain injuries? Let me know how you would raise the funds to complete these treatments.

Please help us help our Veterans