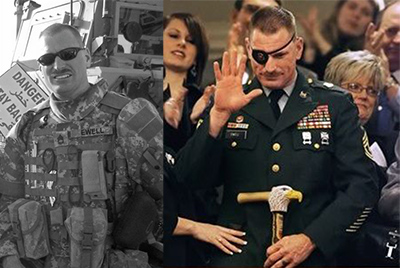 Master Sergeant Gordon L. Ewell (U.S. Army Retired) was deployed to the War in Iraq in OCT 2005. He arrived in Baghdad in Dec 2006. His mission was to find roadside bombs or Improvised Explosive Devices (IEDs); and to ensure that all the teams tasked with this dangerous mission were updated on the latest tactics and techniques the enemy was using with these deadly instruments of war, and had the newest equipment available that they needed to defeat these lethal devices. At the time, he and his teams were finding over 100 bombs per day; over 3,100 per month!

Ewell performed 59 dangerous combat missions. During the course of these missions, his vehicle was blown up on six different occasions, and he was wounded in combat outside his vehicle on two other occasions. He received the Bronze Star Medal for his work as part of the first Mobile Observation Team, for co-authoring the first Route Clearance Handbook (to train new teams who received route clearance missions), and for continuing to perform his duties (making IED’s safe) while engaged with the enemy.

​Ewell received the Purple Heart Medal for wounds received in combat, and the Combat Action Badge. His exposure to repeated IED blasts has left him with a number of physical impairments. Ewell suffered a severe Traumatic Brain Injury (TBI), a broken neck, damage to his back and spinal column, the physical loss of his right eye and damage to his left eye (leaving him legally blind), severe hearing loss (leaving him legally deaf),cranial-facial reconstruction, and numerous neurological problems related to his brain injury. He also suffers from Post Traumatic Stress Disorder (PTSD).

Severely wounded in Nov 2006, he returned stateside in December 2006 and began the long arduous process of a six year recovery that would lead him to six different hospitals in three different states and into the hands of 49 different specialists to put him back together again.

He joined the Utah Army National Guard in 1985, and turned active duty in 1992, after being deployed to Germany during the 1st Gulf War in 1991. He was medically retired in 2010 after 24 years of honorable service and a very distinguished career of achievements.

Ewell is the author of five international selling books, including “Dung in My Foxhole” and “A Lifetime at War,” which received a distinguished “Eric Hoffer Award” for Excellence in Literature. He is also a National Motivational Speaker and Veterans Advocate.

He seeks to give back to his wounded brothers and sisters and disabled Veterans through his volunteer work with outstanding charities and veteran service organizations he belongs to.

Ewell continues to visit our nations Wounded Warriors in hospitals all across the nation.

He is currently a resident of Eagle Mountain, Utah