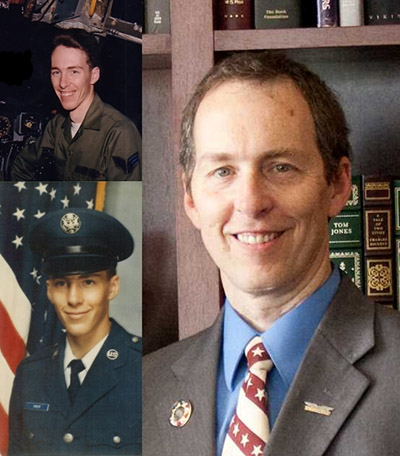 Terry Kohler is an 8 year veteran of the United States Air Force, right out of high school. His desire to serve came from his father’s service in the Navy and Coast Guard (CWO2 – Ret), as well as his grandfather who served in the Army WWII. Terry’s passion was anything with the sky, that is why he went Sky High! His duties were as an Aircraft Engine and Armament Systems (Weapons) Specialist, as well as a Squadron Aircraft Engine Manager Assistant. He received the Air Force Achievement Medal, was Honor Graduate from a 362-hour turboprop engine course, as well as other accomplishments.

Following his military service he spent 1.5-years in Land Surveying, 22-years Computer Drafting in Telecommunications & Civil Engineering Industry. His heart as a Vetrepreneur began in the 7th grade. He enjoys being a servant leader and helping others start businesses! Lived in 17+ States, been in 39+ States. Terry is the founder of CDLveteran.com, SecureMyCCW.training, GlobalPTCruisers.org, RewardingGenealogy.com – to name a few.

Terry’s veteran-community activities include serving a Veteran Business Advisory Council member with the National Veteran-Owned Business Association, as a Regional Advocate for www.BuyVeteran.com and on Utah’s Veterans Business Partnership Committee.

One of his biggest passions is supporting Gordon, since day one, as a Founding Member of Team Veteran.